Despite being in India since the time I was born, I hadn’t been to North India that much. So whatever the leaves I am getting now while working I’m using those to explore the unseen places. Out of all, the Himalayas intrigues me the most and also gives me maximum happiness when I’m trekking it. Even when am not on one, I spend my time reading all about these majestic mountains. Last time I had been to my first ever high altitude trek in Uttarakhand and that was an Easy- Moderate one. So this time I spent a little extra time on my fitness and chose a moderate trek in yet another state I had not been yet – Himachal Pradesh. My first trek experience had left such a lasting impression on my life that without a second thought I again booked my Hampta Pass trek with Indiahikes. I only booked the flight from Bangalore to Delhi, Hampta pass trek for the first week and the return flight from Delhi to Bangalore after two weeks. I had a lot of things in mind to be done for the second week but chose not to plan and book it and rather go with the flow, because mountain weather is always unpredictable and can change any second over there. Now the only thing left was to buy all the necessary things and hence I went to Decathlon. During my first trek I had rented the shoes and trek pole for the entire trek as an experiment; I was not sure if I will be doing more Himalayan treks after that. After the trek I was completely sure that I will be coming back for one very soon so I went ahead and purchased shoes (Trek 100 – the best for high altitude) and trek pole for this time.

Finally the day arrived, for which I was waiting and planning from so many months – the day I was to leave for my 2 weeks of adventure for which I had researched extensively. So I packed all the minimal things required and headed out of the house solo dressed in a normal shirt and camouflage pants with a 55L rucksack and a small 20L backpack. My first destination was to reach Delhi and proceed to Manali from there onwards. I had booked for Hampta pass trek with Indiahikes which was to start the next day from Prini – a village near Manali. I boarded my flight to Delhi and from airport proceeded towards ISBT Kashmere gate bus station by airport line metro till NDLS and yellow line from NDLS to ISBT for my bus which was scheduled to leave at 10pm. Reaching the bus stop at around 6.30pm and having a lot of time to kill, I spent it by reading the novel “INTO THE WILD” on my phone. At 9.30 I started enquiring about my bus and the one thing that got me irritated here was there are certain ticket counters which are always full and no proper person to guide you to your buses near the bus stand. Since mine was an ordinary HRTC bus it was not parked like the Volvo buses just in front. After much confusion and me frantically searching for my bus which was to leave in 5-10 minutes, one of the conductors there directed me to my bus just in time which had stood far away across where all others buses usually stand. As soon as I got into the bus, I noticed a guy sitting on my seat. I was struggling to keep my rucksack somewhere and we both managed to push it on the seat below us. This ordeal got us started from a normal conversation onto a prolonged chat which continued for a very long time (literally like for about 2-3 hours straight) and we became good friends from complete strangers as we had one common thing between us – travel. This guy was actually younger to me and a freelancer, so very different from all other persons I had met till now so I was in awe of what his life was. This is the reason why I choose to solo travel, so many unique people which otherwise you won’t get to meet if you go with your usual gang. Then after sometime he got down at Chandigarh stop and I went to sleep. I opened my eyes at around 6am to the best sunrise ever I could see from the window! The bus was travelling around the hills and I could see that we were surrounded by big blanket of clouds and the view was amazing. I tried to capture the scene but it is best witnessed live.

Then the journey became a bit monotonous as I was alone and hence just looking out of the window with the Beas river flowing by the side giving me company.

It was almost afternoon 1 o clock and we had still not arrived at Manali. By now, it was starting to get really tiring and then at Kullu our conductor made us get down telling that there’s a change of bus and we need to proceed to Manali in another bus adding to the woes. I was the only girl now among a group of 10 other guys in the bus but sure enough I never felt unsafe. So I just kept them in sight and waited. After about 20 minutes our next bus came and we boarded it. Finally the bus left and reached Manali 2 hours later. There in the bus stand itself I got an auto to take me to zostel – It is the most popular hostel like place for solo travelers and backpackers. They have female, male and mixed dorms which consists of bunk beds and personal night lamp, charging point and other necessary stuff. The cost will pretty much fit everyone’s budget and hence zostel is my first go-to stay in any place I go. Zostel is like a 5 minute walk from the main road and you have to navigate through local people’s house paths to reach it and the vibes there was kind of cool perfectly suited for solo backpackers. I loved the room names which they had kept like Kunzum La, Rohtang pass – the nearby famous tourist place names. 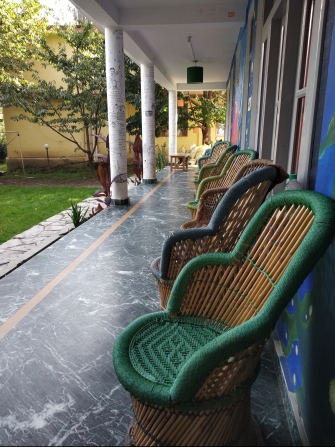 The graffitti work all around the space was awesome and all over the walls you can find people’s drawings, writings, quotes and their social handle names which they have left as a token of memory at this place. I checked in to zostel , freshened up a bit, kept my luggage and everything and wandered out with my little backpack. This area was Old Manali and it was full of people from abroad roaming around the streets and a lot of stuff for street shopping. I was actually searching for a reasonable local place to eat but couldn’t find any. So then finally after walking for a long while I settled down in a nearby cafe. I ordered myself a pizza and a berry juice. Though it was kind of expensive I felt it was tasty. 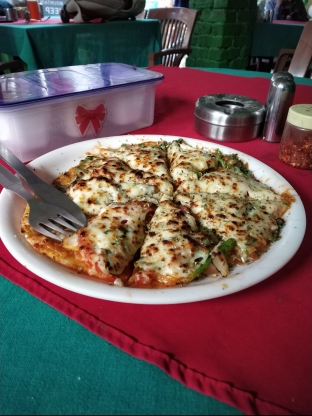 Then I roamed around a little bit more till it became dark and retired back to my room. Since I was too tired and had to reach Keylinga Inn at Prini – the meetup place for Indiahikes trek the next morning at 11am, I dozed off for a good night’s sleep.

Hello! I am a traveller, outdoor lead, basic skier who loves to be amongst nature and outdoors the most. I majorly like to travel solo and interact with new people and learn from their experiences. This blog is a platform through which I will share all my experiences which I encountered during my travel and also some tips which I think will be relevant with people having same thoughts as mine. I also run a YouTube channel where you can find a few videos from my travel experiences. But I believe a video cannot cover all the minute details which I will be sharing across this blog. Do share and support if you like it :) View all posts by rashtravelmusings